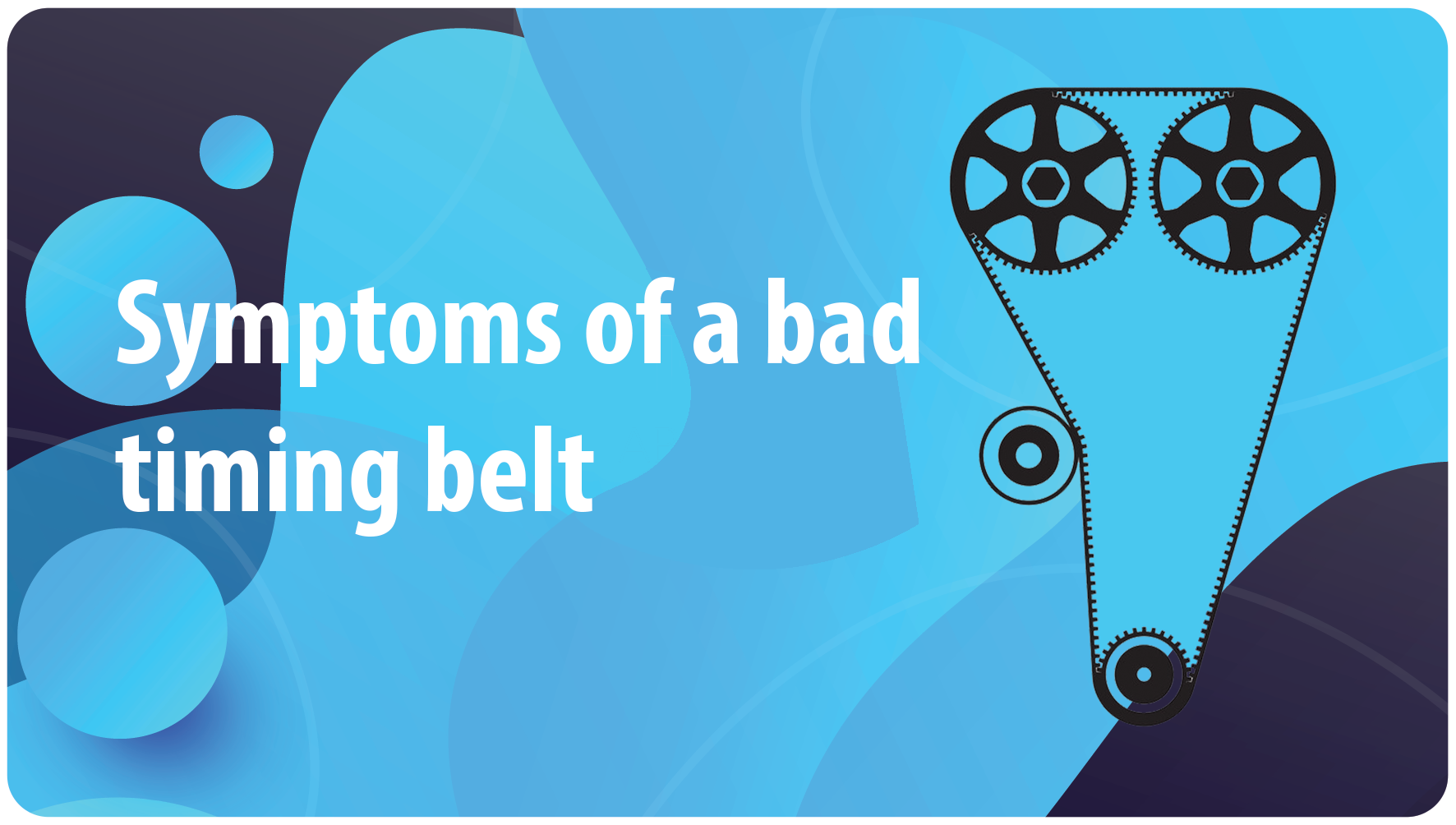 I have changed 100s of timing belts over the past 25 years and I can promise you no one on this planet can 100% tell you if your timing belt needs changing without doing 1 of 2 following things.

1.       Paying a mechanic hours in labour to dismantle all the covers and inspecting the actual belt itself for wear and cracks.

2.       Buying yourself a cheap OBD2 code reader and checking for error codes concerning Crank/Cam synchronisation. If there is a fault it means your timing belt has stretched and needs changing immediately.

All other signs are usually pointing to a bad or worn timing belt but are never 100% and are kind of a guess. To be on the safe side it is always best to buy a cheap OBD2 scanner and scan the car yourself.

Timing belts are one of the most common parts of your car, but they can be difficult to replace. This guide will answer all your questions about when it’s time for a new timing belt as well as point you towards how you can determine if your timing belt is faulty or need replacing!

How do all timing belts work?

Timing belts keep your engine running smoothly by managing the pistons, camshaft, or camshafts if you have more than 2, and timing valves. A timing belt is what connects these parts so they can work in perfect sync with each other!

The timing belt is what synchronizes and controls the engine, making sure that all of its parts work together effectively. The most important task for the timing belt is managing fuel combustion by opening and closing valves when necessary.

Can you change your timing belt to a chain?

Timing belts are used less frequently than chains, but they’re not interchangeable. Your car has one or the other and you can’t just opt to switch from a belt-to chain either way!

What material is a timing belt made from and do you need to change it?

The actual timing belt itself is made from tough rubber. The timing belt is one of those components that you can’t see, but it’s an important part of your car. Timing belts wear out over time and must be replaced with new ones according to the vehicle manufacturer’s recommended service schedule-or else there could be serious problems!

What are the signs of a bad or failing timing belt?

The timing belt is a critical component of your engine that must be checked accordingly. The experts advise any vehicle owner to have their timing belts checked between every 50,000 miles (or according to the manufacturer’s recommendations). And even if you do not drive often, it still requires replacing based on overall age because they are made with rubber which will stretch wear dry and deteriorate over time!

The timing belt is one of those things you should replace sooner than later. It could lead to thousands in engine damage and it’s not worth taking a chance on!

Symptoms of a Bad, Worn, or Stretched Timing Belt

Many different symptoms can indicate a need for timing belt replacement. If you experience any of these signs and notices, get in touch with your mechanic as soon as possible!

Rough Idling of the Engine caused by a faulty timing belt

When the teeth on a timing belt start to wear or become brittle, it can cause them to slip from the crank pulley or cam pulley. It can also break apart in some cases, this would result in serious problems with your engine as it is rotating at a very high speed.

Once the teeth are slightly worn they will start idling rough or sound different, this is also called a stretched belt. When this happens, you can check with an OBD2 scanner it should show the code P0016 Crankshaft position/camshaft position which means the timing belt is not correctly synchronised.

Misfire of the Engine caused by a faulty timing belt

Imagine the cylinder opening and closing too soon or late, with hot gas leaking everywhere. This can jeopardise your engine’s combustion and cause a misfire on multiple cylinders. When you plug in your OBD2 scanner it will show a code P0300 Random/Multiple Cylinder Misfire Detected

Smoke from the Engine  was caused by a faulty timing belt

If you’re experiencing smoke coming out of your exhaust system, then there’s a good chance that it is due to an unsynchronized timing belt. This will result in inefficiently burning fuel, which can lead to a large amount of smoke coming out of the exhaust and also major issues with other components like valves and pistons.

The cylinder heads of an engine are responsible for letting out and in both intake air and exhaust gasses. The opening/closing motion is transmitted through the camshaft, which rotates with perfect synchrony to make sure that all valves open the ports at the same time.

When the timing belt is off, it can cause skipping and breaking off pieces of the camshaft. Some may fall into the vehicle’s oil pan resulting in lower engine pressure which will eventually lead to failure altogether! The only way you’ll be able to recover from this disaster is if you rebuild all motors entirely new again

Bent Pistons or Valves  caused by a faulty timing belt

The worst thing that can happen to your engine is when the timing belt breaks or gets cut off. This will cause all of those worrying noises you’ve been hearing from time to time, like loud bangs and even explosions! Once this happens there’s nothing stopping pistons from hitting valves as they open up tight spaces for gas/airflow through their respective channels on an efficient basis – which could bend them considerably more easily than before under extreme circumstances such as being bent by pressure waves caused during combustion events.

Timing belts can be a pain to replace, but if you have the right tools and know-how then it won’t take long. The cost of labor will depend on how many hours were spent replacing your timing belt; for cars with small engines that should involve less work than larger vehicles such as SUVs or trucks which might require more time because they’re harder to work with.

Timing belts are one of the most important components in an engine, and when they break they can cause major problems. The cost to replace them varies depending on who you hire but is typically between £250-620 pounds which makes this job much more affordable than trying to repair a damaged or failed engine. Based on experience, skill, and certifications mechanics may charge from as little as £15 per hour up to more than £55. The average usually falls somewhere around £35 per hour.

Timing Belt Replacement Process and what is involved

Stripping front engine housing connections, assessing various pulleys along with water pump seal thicknesses/film condition, etc. Then comes the actual time belt replacements as well as updated components associated with it ( such as resets valves & camshafts). Once that’s done it’s a case of reinstalling everything back together again.

What happens if your timing belt breaks while driving

The timing belt is a very important part of maintaining your engine. If it were to break, you could be in for some serious trouble!

Typically, Timing Belts are done at regular intervals so that they may keep the upper half synced with the lower portion of the engine. But what happens when this crucial piece naps or breaks? The result would mean instant disaster–both as well as figuratively speaking because without the timing belt in place the engine will not be in sync and all components will be smashing into each other.

The following is what will happen if you have a timing belt snap. First, you will get bent valves as the result of the piston coming up at the wrong time! The camshafts are usually not affected by such events but can cause problems, If all these weren’t enough already then there’s more bad news – cylinder walls might get dents in them too.

How to prevent your timing belt from falling

The first thing I would do is buy a cheap OBD2 scanner, we have made a list of the best most affordable scanners currently available click here to see the full list. Scan the codes on your car regularly, probably once every 2 months and if there are any codes relating to the synchronisation of the cam and crank or multiple cylinders misfire you know it’s time to change the timing belt.

Secondly, if there are any other errors codes keep on top of them and get them repaired. The scanner will show all the car’s faults.

Lastly, make sure you change the timing belt according to the manufacturer’s given time frame. This can vary but usually, it’s 100k miles.

I have been a Mechanic for over 25 years in the trade! I have used most if not all OBD2 scanners from expensive to cheap brands. I have worked for Mercedes, BMW and Honda before I started my own car diagnostic business. Now I run a successful car diagnostic business and train other mechanics how to diagnose faults with all types of cars.

I have been a Mechanic for over 25 years in the trade! I have used most if not all OBD2 scanners from expensive to cheap brands. I have worked for Mercedes, BMW and Honda before I started my own car diagnostic business. Now I run a successful car diagnostic business and train other mechanics how to diagnose faults with all types of cars

Some of the content on this website includes links which we may receive commission on when purchased. As an Amazon Associate I earn from qualifying purchase. This does not impact our recommendations or reviews.